SEARCHING FOR TREASURE (or...SOMETHING IN THE WATER)

For centuries, people from all over the world have traveled to the Bedford Springs for different reasons...each hoping to find their idea of treasure.  Some came for rejuvenation, others for healing, some for escape...but for me and the kids I grew with, Davey Lewis' Cave is what first lured us there.  The story of Davey Lewis fascinated me as a kid..."the Robin Hood of Pennsylvania"...who robbed from the rich to help the poor.  Some saw him as a criminal..others as an "equalizer."  Legend has it that he would hide out and escape through a series of caves located near the Bedford Springs Hotel and that part of his treasure might still be there.  What kid wouldn't want to search that cave?  On more than one occasion, I've visited Davey's cave in woods on the other side of Shober's Run with Jake, Robbie, Beau, and other neighborhood kids hoping (but never finding) whatever it might have been that Davey Lewis left behind.

Native Americans who lived in the area knew that there was something special about the mineral waters flowing out of the mountains.  They used the springs to rejuvenate, treat wounds, and cure illnesses.  The property, purchased in 1794 by Dr. John Anderson, eventually grew into a world famous resort which has hosted seven presidents (Andrew Jackson, John Tyler, James K. Polk, Zachary Taylor, James Buchanan, James Garfield, William H. Taft), five future or former presidents (Thomas Jefferson, William H. Harrison, Dwight Eisenhower, Ronald Reagan, George W. Bush) and many other notable politicians and industrialists (Henry Clay, Aaron Burr, John C. Calhoun, Henry Ford).  During his lifetime, President James Buchanan made over forty trips to the Bedford Springs.  He was drawn to the area, not just by the rugged beauty of the Allegheny Mountains, but by the "healing" powers of the mineral springs making their way out of the mountainside.  The building served as President Buchanan's "summer White House" during his four years in office (1857-1861) and provided relief from the oppressive D.C. heat for the U.S. Supreme Court while they worked on the Dred Scott Decision.  It was at the Bedford Springs that President Buchanan received the first trans-Atlantic telegraph message (from Queen Victoria).  The resort boasted a premier golf course and installed one of the country's first indoor swimming pools.  In 1984, the hotel, and the land around it, were designated a National Historic Landmark.

As a teenager, I would once again be drawn back to the Springs...not searching for Davey Lewis' treasure...but looking to earn a little cash of my own.  Along with the other kids I grew up with on South Juliana Street, I'd walk over to the Springs, trudge through the creek which flowed through the golf course, and search for lost golf balls...which we would sell back to the golfers on the course...pocketing some cash of our own (to the chagrin of the local golf pro).

A few years later my neighbor, Charles, and I were each given jobs working as stage hands for local legend, Fred Smith.  Fred Shannon Smith was the leader of a popular big band, Fred Shannon Smith and the Clubmen Orchestra, which performed at the Bedford Springs almost every Saturday night.  Working for Mr. Smith felt like an awesome privilege....but it also was my first real taste of responsibility and having to meet strict expectations.  When our job was done, and the band was in full swing, Charles and I spent hours exploring a now increasingly dilapidated Bedford Springs Hotel.  It was evident to us that no amount of money or fabled treasure hidden in cave could save the building.  The best days of this historical resort seemed to be in the past.  The Bedford Springs officially closed it's doors in 1986.

In 2007, the property re-opened and reclaimed its splendor...becoming, once again, a destination for people to escape, rejuvenate, and treasure.  My fascination with the history of the building and surrounding property continues to this day.  If possible, when I come home to visit my dad and Mary Jane, I bring my road bike along on the trip.  A route past President Buchanan's summer White House is always included in any ride that I take in Bedford.  On the occasions when I don't have my bike with me I've hiked the trail system that has been constructed around the mineral springs which so many people once made a pilgrimage to experience.  The trails even offer easy access to the entrance of Davey Lewis' Cave (no longer does an adventurous kid need to wade through the water and bushwhack overgrown brush to find it).

The Iron Spring is near the base of Springs Trail.  Bathing in it's waters were thought to give you increased energy and a overall sense of well-being. -- August 6, 2017

I've hiked the trails near the Springs three times now.  The first two times with Robin and last week on my own.  Dad dropped me off at the trail head near Sweet Root Road and I asked him to pick me up in an hour.  I wish I would have had time to take in the sites around me...but that wasn't the case.  The nearly three mile hike combining Evitt, Spring, and Naugle's Mill trails wound past Davey Lewis' Cave, around Constitution Hill, and then down a steep switchback which descended to the Iron Spring and across to the Limestone Spring.  The trail systems, arranged from easy to difficult, are set up in a way that any hiker (of any ability) can experience the natural beauty of the Bedford Springs.  Making the most of my time schedule,  I was able to do a little reminiscing, get my heart rate up, see some wildlife, clear  my head, and experience the waters that so many people once sought out for "healing."

Maybe there IS something in the water.  Maybe there really is something special hidden deep in a cave.
I don't know...but, those things don't matter much to me anymore.  Rediscovering a place of my childhood...spending time outdoors...appreciating the history of a place that meant so much to so many...and sharing the experiences with my wife and with my son.  These are the the things that continue to bring me back to visit the Bedford Springs when I am in my hometown...and these are the things I treasure. 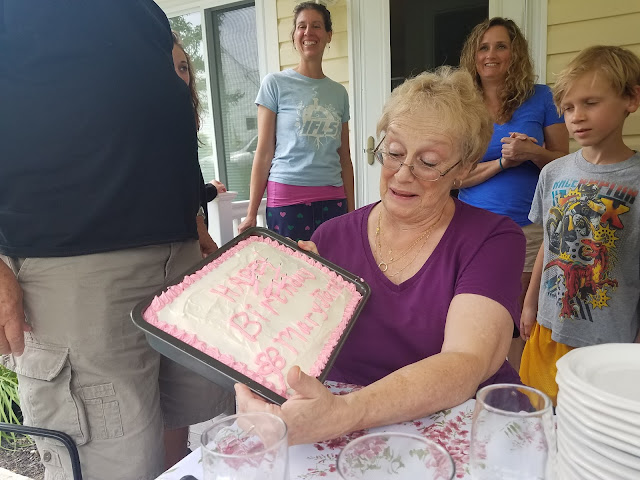 All trails lead to ice cream...and birthday cake!  Happy birthday to the best step-mother in the world...Mary Jane Raymond.  I love you! -- August 6, 2017

Interested in hiking the Bedford Springs or other parks I've been to?  Check out the TRAIL MAPS and TRAIL HEADS tabs on the ALL TRAILS LEAD TO ICE CREAM website.

All of my posts are available at ALL TRAILS LEAD TO ICE CREAM and, if you get the chance, be sure to visit HIGHPEAKSHIKING.COM!

Here's the GARMIN maps and data from my hikes at the Bedford Springs and a few of my bike rides through the area: