For one week every June, the town of Ohiopyle, Pennsylvania becomes my home away from home.  I've written numerous times about my family connection to this amazingly beautiful state park located in Fayette County, Pennsylvania.  My grandparents spent time here with my parents, my parents spent time here with me, and now I absolutely love coming back each year with my son, Alex. It's a week that I look forward to each year because it means that another school year is in the books (pun intended) and the entire summer is still ahead of me.  It's a week that allows me to slow down, hit the pause button on life, and enjoy the best that the little town of Ohiopyle, the Youghiogheny River, the surround streams and creeks, the forest, and the trails have to offer.
As alluded to...I don't go on this yearly adventure alone.  My son, Alex, has traditionally joined me...as has his best friend, Devin.  Last year, we included my niece, Jackie, in our big kid adventures.  She loves every aspect of our time in Ohiopyle...whether it is hiking up a mountain, exploring waterfalls, or just relaxing at the campsite.  Far from being a moody teenager...Jackie fits right in and has earned a permanent place in our camping group.  The week was also highlighted by the presence of my great friend, Mike Graham, and a visit by my college roommate, Chris Lowe.  One of the nicest surprises was that my other niece, Shalice, seriously stepped out of her comfort zone and joined us for the week.
From the beginning, we knew that this trip would be different from previous camping trips.  Coincidentally, we timed it perfect.  Because of the Covid-19 Pandemic, DCNR had just reopened the campground cabins two days prior to our arrival.  We also understood that some of our usual activities would be (and were) altered or even put on hold until next year. None of this impacted our experience or the time that we had on our adventure this year.  If I were to break down our normal daily routine while camping it would look like this...a morning campfire with coffee and breakfast, followed by the day's planned big kid adventure, culminating with a relaxing evening around at the campsite.
Personally, I enjoy sitting in the morning by the campfire with my coffee and a good book...but I'm sure that if you asked Alex or Jackie what the liked best about hanging out at the campgrounds they would say the food.  There is no shortage of it...that's for sure!  I make a point to take them all to Walmart on our way to the campsite so that they can pick out what they want to eat.  This ensures that the food we buy will also be eaten.  A lot of the dinner recipes were inspired by COOKING WITH LEWIS AND CLARK....a video series that Mike Graham and I do for our students at school.  With meals like hominy and bacon and hominy fritters...it is quite possible that our week at Ohiopyle keeps the hominy industry in business!  A lot of bacon is made (not necessarily in the fashion pioneered by our forefathers), a lot of chips are eaten, smores made and devoured, and mountain pies toasted in the fire.  All of this making for a week of good relaxation and good eating for everyone. 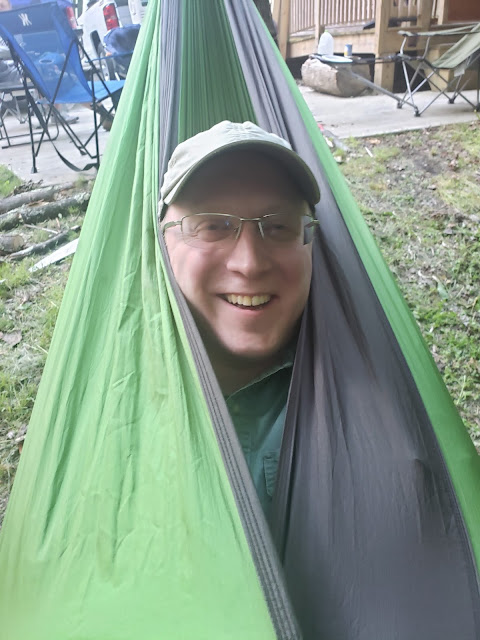 Mike Graham in his hammock. -- June 15, 2020
Each of our days at Ohiopyle are also packed full of what I like to call "big kid" adventures.  Usually this includes a white water rafting trip down the Youghiogheny but this year, because of the pandemic, we opted just to explore and stay within our own little group.  The extra day allowed us time for Jackie to experience the natural water slide that flows through the park and for us to explore an area called Cascade Falls.  This really seclude area, not far from the natural water slides, had huge cavernous walls of rock on each side, waterfalls, and a few swimming holes.  From there we made a trek down past (and under) Cucumber Falls and out to the Youghiogheny River.  While the boys skipped rocks Jackie and Shalice, because the water levels were so low, were able to wade further out into the river to "swim."
Using my ever-so-handy Purple Lizard Map I mapped out a super cool (and at times super steep) seven mile hike for us to do.  After our discovery last year of Jonathan Run Falls I knew that it had to be included in our hike this year.   From our campground we made our way down the ridge towards Jonathan Run Falls.  Again, with the water levels significantly lower than they were last year we were able to explore the area around the falls so much more.  This has become my favorite area in Ohiopyle.  It is secluded and far enough away from the main town that very few people make the trek to it...and it is absolutely beautiful and peaceful.  I could have stayed there all day... but onward on our hike.  Which, by the way, then make its way up the next ridge on Mitchell Field Trail and then back down to Jonathan Run and up to our campgrounds. 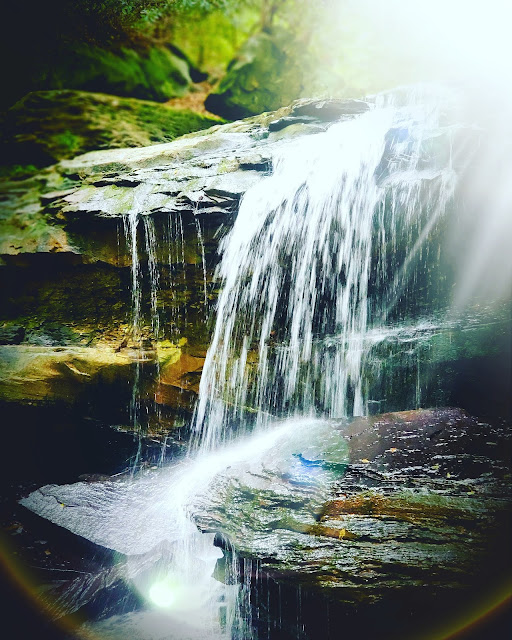 Jonathan Run Falls at Ohiopyle State Park.  -- June 17, 2020
I completely got my "nerd" on during our excursions to the sites that encompass Fort Necessity National Battlefield.  Fort Necessity, an opening battle of the French and Indian War, is mostly known because a young (and arrogant) George Washington was soundly defeated by French and Native forces after constructing what was, in effect, a deathtrap of a fort.  His "fort of necessity."  It would be the only battle in which George Washington ever surrendered.  Why did he need a fort of necessity, you may ask?  Because a few weeks prior he, and his Native allies, massacred a group of French diplomats who were camping under a rock outcropping 10 miles from the site of Fort Necessity.  The area, which has become known as Jumonville Glen, is considered to where the first shots of the French and Indian War were fired.  This secluded area, with its rugged beauty, is a super cool hike for anyone who loves both nature and history.  Today, Route 40 connects Fort Necessity and Jumonville Glen.  Along that section of road you  can also find the final resting place of British general Edward Braddock who was sent to North America to defeat the French.  A year after the debacle at Fort Necessity, Braddock blundered into a force of French outside of what is now Pittsburgh, Pennsylvania.  Mortally wounded he passed away after five agonizing day.  He was buried under the road with none other than George Washington presiding over his makeshift funeral service.  The army marched over the grave to eliminate any trace of it.  Braddock's remains were found in the first decade of the 19th century and were reinterred a few feet away.  A large monument, clearly visible from Route 40, marks his final resting place to this day.
Usually, our final full day at Ohiopyle is dedicated to just relaxing by the river....but first I was able to sneak in a mountain bike ride.  The kids were kind enough to drop me and my bike off on top of the mountain so that I could get a good mountain bike ride in.  For years I have been eyeing up a trail head that we pass on the way out of the town.  Canyon Edge Trail proved to be a super fun single track which connected to a trail that I had ridden a few years ago.  From there I made my down the ridge and met the kids at Baughman Rock Overlook to take in the view.  To get to the town down below the kids took my truck and I took my bike down Baughman Trail...an extremely fun down hill that drops over 800 feet in 2 miles!  The trail empties out right near the general store...a perfect place to meet everyone for some ice cream and then relaxation at the river.
I'm writing this post exactly a month after my trip to Ohiopyle.  It is mid July and I've already begun planning next summers trip back to Ohiopyle State Park.  That is how much I look forward to it and how much the place means to me.  In the meantime...in one hour I am leaving for my next camping trip.  This time to Rocky Gap State Park with my beautiful wife, Robin, to celebrate our 7th wedding anniversary.   Covid-19 has put a damper on a lot of things...so my wife and I are headed out to do what we do best...enjoy each others company uninterrupted for five days.  I can't wait.
I sincerely hope, if you are reading this, that you and your loved ones are having a safe and healthy summer.

Here are the GARMIN maps and data from the rides and hikes featured in this post.  #OptOutside2020

JUNE 15, 2020 -- BIKING GORGE TRAIL AND THE GREAT ALLEGHENY PASSAGE
JUNE 16, 2020 -- EXPLORING CASCADE FALLS
JUNE 16, 2020 -- EXPLORING CUCUMBER FALLS
JUNE 17, 2020 -- HIKING KENTUCK, JONATHAN RUN, AND MITCHELL FIELD TRAILS
JUNE 18, 2020 -- HIKING THROUGH JUMONVILLE GLEN
JUNE 18, 2020 -- MOUNTAIN BIKE FUN IN OHIOPYLE
All of my posts are available at ALL TRAILS LEAD TO ICE CREAM and, if you get the chance, be sure to visit the good folks at
GUNG HO BIKES
YOUR TRUE NATURE
PENNSYLVANIA DCNR
WHITE WATER ADVENTURES
and
PA PARKS and FORESTS FOUNDATION.