THE SPIRIT OF EXPLORATION

It's pretty well known that Christopher Columbus didn't actually "discover" America.  Heck...he never even made it to the mainland (although who can fault him for hanging out  in the Bahamas?) I have this belief that you can't really discover something that's already well known to other people.  Yeah...there were others who came to the western hemisphere well before Columbus.  Native people came here anywhere from 40,000 to 13,000 years ago.  It possible that St. Brendan the Navigator, doing missionary work, traveled to the New World 1,000 years prior to Columbus.  There are some who believe, based on a map of Chinese origin, that Chinese explorer, Zheng He, may have made it as far as the Americas during one of his seven voyages between the years 1405 and 1433.  And yes...evidence has proven that Leif Erikson traveled to Newfoundland around 1,000 A.D...a full 500 years before Christopher Columbus "Sailed the Ocean Blue."

So, if Mr. Columbus didn't "discover" America...what exactly did he do?  Well, he was the first to open relations between Europe and the Western Hemisphere.  His voyages mark the beginning of more than 500 years of cultural, economic, and political relations between Europe and the Americas.  You can also credit him with the fact that written recorded history of the Western Hemisphere begins with Columbus.  (There are also many negative impacts of Columbus' voyages...but I won't go there right now.  I want to keep things positive.)  So...thanks, to President Franklin D. Roosevelt, in 1936, Columbus Day became a federal holiday...and I have off from school.  Personally, I'm not a fan of  Columbus Day...and I'd rather either celebrate Indigenous Peoples Day or just go to school and teach my butt off...but; nevertheless, every October I can count on having the day off...so let's make the most of it.


Mark and I first met when he began teaching at Northeastern Middle School 12 or 13 years ago...and we began riding together in 2006.  Most of what I know about mountain biking I learned from him.  Last year we decided that, if we were going to have a day off of school for Columbus Day, we ought to, at the very least, use the day to honor the spirit of exploration.  So, with bikes and gear loaded up, Mark and I set out for a section of Michaux State Forest, near the Chambersburg Reservoir, that we were completely unfamiliar with.

The only plan for our day was exploration.  If we found a trail we took it.  There was no such thing as a wrong turn.  Mark and I just set out to ride.  What we rode...and what we found...was nothing short of amazing:  trails that very few mountain bikers have ridden (there were absolutely no segments found when I loaded my ride into STRAVA),  views that were breathtaking, new places to take Timmy, Glenn, and rest of the gang, and a very kool sense of pride, excitement, and accomplishment that comes with the spirit of exploration.

No one can pass up a stop at the historic Round Barn.  On our way home both Mark and I could hear the whoopie pies calling our names! 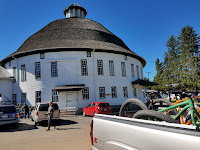 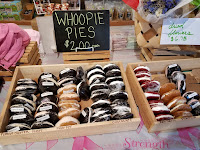