Most of the people who mountain bike in York County head to one of two places...Rocky Ridge County Park or the Lakes.   If time permits, I will always choose to go somewhere other than these two places.  I sometimes take both of these parks for granted...but it is so nice to have two amazing trail systems so close to home.

The Lakes provide water to York County.   The first of the lakes, Lake Williams, was constructed in 1913 using mule-drawn wagons to haul dirt away.   By 1968, Lake Williams was no longer big enough to supply water to the growing population of York.   It was then that the York Water Company began construction on Lake Redman.   Combined, the two lakes hold 3.1 billion gallons of water.   In 2004, a pipeline connecting the lakes to the Susquehanna River was completed.    It is capable of drawing millions of gallons of water from the great river to help keep the lakes full!

Like the trails at Rocky Ridge, the trails at the Lakes are numbered.   Tim and I started today's ride at the dam near George Street.  A quick ride across the dam led us to trail #1.  Nothing like a nice little climb to the top of the ridge to get the blood flowing and help us forget about the morning chill.

The trails coming off of the top of the ridge north of the dam are some of my favorite in the park.  As I twist and turn down the hillside I lose myself in the beauty of the woods.   Before I know it, Tim have completed a loop and are back at the dam.   Next on our agenda...up an old and abandoned trail that takes us to the other side of Lake Redman and to the boat docks.

This little loop is one of the first trails I ever mountain biked!  Interestingly enough, my brother, Jake, showed me this trail.   Jake now lives Mesa, Arizona, but when I moved to York, Jake was attending York College of Pennsylvania.   He brought me here over twenty years ago.    Over time, parts of the trail have changed or have been rerouted...but they are still here.

One thing that hasn't changed is the Lake Redman sign that sits along the trails facing Interstate 83.   Often the weeds and grass along the sign are overgrown...but today they were cut back allowing Tim and access to the area.   The view of the lake from there is nothing less than spectacular!
Lapping the boat docks, Tim and I headed back towards George Street to get to the Lake Kain side of the park.   Then...SNAP!   There goes Tim's chain.

It didn't surprise me.   This is a common occurrence when he and I ride.   No big deal.  A few minutes later we were back on the bikes and headed towards Lake Kain.  Now I am on on time limit.   I promised Robin I would be home in time to help her get the house ready for company.   No worries....I have a plan that would allow Tim and I fun ride and still get me home in time. 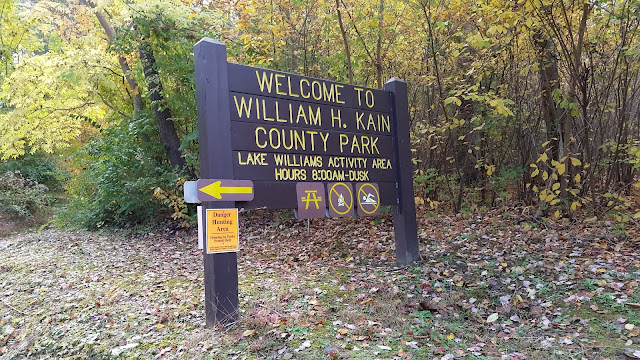 Like a lot of plans... these ones were thwarted, too.   Our ride around Lake Kain started out great.  Down to the lake...up and across the ridge...down my favorite single track on that side of the park...and right back to the lake.

The view of Lake Kain from Water Street is one of my favorites.    From there, Tim and I began our trek back to the parking lot.   I figured we could do it in about 15 minutes.   Then it happened...again...SNAP!  Tim's chain broke in half a second time.    This time I got a verbal promise from my good friend that he would purchase a new one.