The big event of the day was the Van Halen concert tonight at Hershey Park Stadium.  Alex and I have had tickets for the show since the beginning of the summer.   My son has been pumped to see Van Halen with David Lee Roth as front man.   So....if I wanted to ride Michaux today with Tim and Chris we knew we would have to stick to a tight time frame. 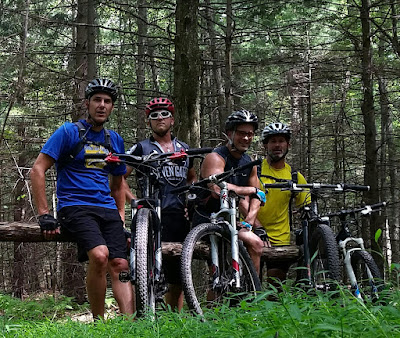 It was a nice surprise when I picked up Chris and he told me that a buddy of his, Chip, was going to ride with us.  Chip is just an all around great guy.  He is an assistant principal in Spring Grove school district.  He's fun to hang out with, he's fun to talk to, and, for someone who doesn't get to ride as much as he wants, is a heck of a mountain biker.   Chris and met Tim and Chip at our usual meeting place in East Berlin and headed out.

As always, because I am a creature of habit, we parked at the Furnace Stack pavilion section of Pine Grove Furnace State Park.  Literally 30 seconds after we got onto Tom's Run trail I crossed paths with a good friend, Derrick Rorrer.  Derrick is a bike mechanic at Gung Ho Bikes.

I started mountain biking in 1995 when I walked into Gung Ho and met Jay Zech.  I often tell Jay that was the first friend I made when I moved here.  Both he and the shop have been a mainstay in my life since.  I am 100% loyal to him and Gung Ho.   Not sure I could ever purchase a bike elsewhere.  A few years back, Jay and his wife Penny, gave me a summer job at the shop.   I learned so much there and I am so appreciative.


Tim, Chris, Chip, and I did my standard ride at Michaux (minus a few loops because of time.)  To be honest....we could have completed more of the usual ride...but that would have meant no ice cream at Mountain Creek Campground.  Not that we are wussies...but no ice cream after Michaux is not an option.

We managed to get back within our time frame.  As for that Van Halen concert in Hershey tonight... 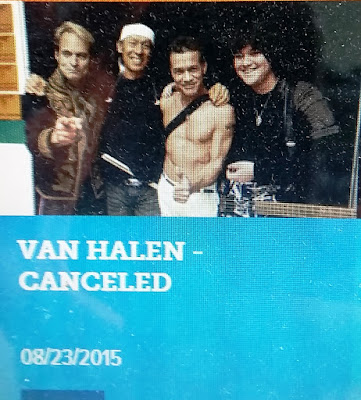