It's a term that Mark and I use when the trails get sloppy, muddy, mucky, or just all around difficult.  It's a term I also use on the road when I have to ride straight into a head wind.  "It's like pedaling through peanut butter!"  I can remember a ride, probably back in '08 or '09, when Mark, Glenn, Mikey, and I went to Blue Marsh Lake on a January morning...a morning that was so damn cold we really had no good reason to be there.  The temps were in the low teens when we started out.  It was so cold that I couldn't talk....I mean it...my jaw was so frozen I couldn't form words!  Funny thing about that day was, by the the time we were two-thirds of our way through the 30 mile loop, the temps had risen to a balmy 40 degrees.  Those trails that were frozen solid at the beginning of our ride were now a melted muddy mess. There's no such thing as a bad mountain bike ride...but I look back on the end of that ride and all I can think of is that, for the last ten miles to the truck, I felt like I was pedaling through peanut butter!

Even though Blue Marsh Lake has been the sight of some of the sloppiest rides I've ever been part of...thanks in no small part to the "suffering" that my friend, Butch Ulrich, plans for the participants of his adventure races...we've pedaled though peanut butter in plenty of other places.  From West Virginia, to North Carolina, to Jersey, to Maryland, to the local parks in our home county, we've navigated our fair share of muck and mud.  Here are just a few of my favorite peanut butter pics...

There have been plenty of road rides that also were "peanut butter-like."  Times I've raced storms home...times that, no matter which direction I turned, I was riding into the wind...and one road ride, in particular, that I will never forget.  It was Easter weekend 2012.  My wife, Robin, and I had been dating for more than a year and  half.  She was away for the part of the weekend with her girls so I decided to take an ambitious road ride.  I've always loved the sugar cookies at the Historic Round Barn west of Gettysburg, Pennsylvania...so off I went.  Forty miles into a steadfast and obnoxious head wind with nothing but the thoughts of sugar cookies dancing in my head.  Forty miles of road cycling through peanut butter just to find out that the Round Barn wouldn't be open for the season for another two weeks!  Part of  me felt like the south end of a horse headed north...but the other part of me was pretty darn proud of myself for pedaling against the wind for that long.  I came home, that day, through the Gettysburg National Military Park and then stopped for lunch at a Sheetz outside of town.  No sugar cookies...but never had an MTO tasted that good!


As any of you who read my stuff know...and believe me, I never thought that anyone would ever take time to read what I write and I'm so appreciative and honored that you do...biking is, for me, a metaphor for life.  Currently, as I'm sitting on my couch writing this instead of teaching my students about the Constitution (on the day before the presidential election), I feel as though I'm pedaling through peanut butter.  My brain is a little fuzzy from the meds I'm taking (Mark called me yesterday and jokingly said that he could have had a more coherent conversation with Cheech & Chong!) and my back is pretty sore from my days old eight inch incision.  Life, like the trails we ride, can get muddied and messy and difficult.  Just last week I had my second back surgery in less than six months.  I knew that there was a possibility that this was coming...but I didn't  anticipate it so soon.  This one was a little more significant which, in turn, makes the recovery (and pain) more significant.  I now have four wonderful titanium bolts holding my spine together like an erector set!  Yep...I can literally say that I'm screwed.  I got to tell you though, Dr. Salotto was fantastic and the nurses (as well as everyone else who took care of me at Wellspan) were absolutely amazing.  They brewed me coffee in the wee hours of the morning and brought me all the grape Popcycles I could eat (even at 1 AM).  Heck my pre-op nurse was the mother of one of my current students.  Kind of makes me feel fortunate that my students like me! 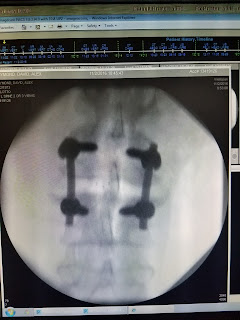 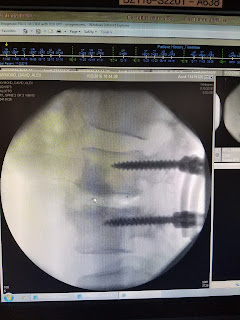 So yeah...for the time being life is forcing me to slow down a bit...a hard thing for me.  Sitting still is not my style.  It's kind of like I'm pedaling through peanut butter.  But you know...even though some of those trails got messy and tough it never made me stop moving forward.  I always finished the ride and look back on those peanut butter rides as character building and, ultimately, pretty damn fun.  The healing has begun and before I know it (as long as I listen to my wife, my doctor, and my body) I'll be back on the bike riding with Mark, Timmy, Kristian, Glenn, and the rest of the crew feeling like a new man...actually, maybe better than new.  I have titanium in me now!  Even Steve Austin, the Six Million Dollar Man, didn't have that!  Let's see if the guys can keep up with me then!

Life is a journey...not a destination!