For me, there is a novelty in exploring places far from home.  Just the thought of..."Hey!  I'm riding my bike in Florida!" is really cool.   I've never, in my life, been to St. Augustine, Florida.   I've seen signs for it on I-95 the few times I've driven though the "Sunshine State."  Just the nerdy fact that it is the oldest permanent European settlement in North America made me want to go there.

Each year, my wonderful wife, Robin, and I take a trip someplace warm when the temperatures in Pennsylvania begin to plummet.    The last two years we flew out West...spent some time in Pheonix and Sedona.  This year we decided to drive to West Palm Beach in Florida...and a stop in St. Augustine to site see and visit a friend of Robin's from grad school was a must!   Robin's friend, Carolyn, offered so much warmth and hospitality. It was a pure joy to meet her.  While the ladies chatted and caught up with each other, I took a tour of route A1A through St. Augustine.  Riding along the ocean is so different than riding in Pennsylvania.  No hills....but a stiff ocean wind.   Riding out of Carolyn's neighborhood the ride seemed almost effortless.   An omen that my ride back, into the wind, would be a little more difficult.

I crossed the Vilano Bridge I hooked onto Route 1.  Robin and I have a joke about Route 1.   Two years ago, she planned our first anniversary trip.   She took me away to an awesome bed and breakfast in Richmond, Virginia.   She wanted to do a special "nerdy" and history laced get away.   To get there, we took "Historic" Route 1.   Let me say that parts of the road may be historic...but not the section we took.   Now....every time we go somewhere...we just can't seem to escape the road!
Cruising into the historic district of St. Augustine, my main goal  was to just ride.   I wanted to save the site seeing for when I was there with my wife later in the afternoon.  I passed the and old Spanish fortress, Castillo de San Marcos.  So super cool.   It is the oldest masonry fort in North America.   Completed in 1695, it replaced a series of wooden forts constructed by the Spanish, and, for many years, was the northernmost outpost of Spain's vast New World empire.
Exiting the historic district, I rode across the Bridge of Lions to the other side of the Matanzas River.    Not knowing exactly where I was going, and with the knowledge that I told Robin I would only be gone an hour, I just pedaled on the main roads until I was out for thirty minutes.


I had ridden as far as 7th Street on Anastasia Island when it was time to turn around.   I knew going back would take a little longer.   That ocean wind that was so helpful the first half of my ride added a bit of a workout on the way back....a different kind of work out.   I'm used to climbing hills in Pennsylvania.   Not here.    I think that, in total, I only climbed 38 feet!   Amazing.    Yep, there is a novelty in it for me.  Next stop...West Palm Beach and  a week of ocean breeze, warm temperatures, and most importantly...time spent with my wife. 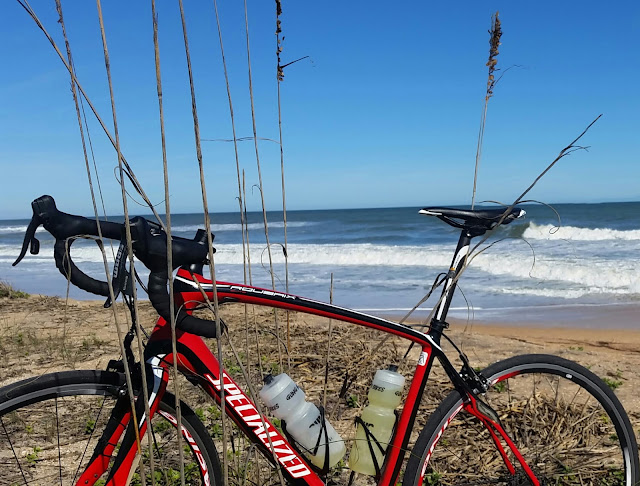 Posted by DAVID A. RAYMOND at 12:25:00 PM
Email ThisBlogThis!Share to TwitterShare to FacebookShare to Pinterest