Sunday morning rides are often my favorite.  It sometimes seems as if I am the only person awake.  Because of this, I will often ride into, through, and around York City.


Today's ride took me out of Manchester and straight down the Susquehanna Trail towards York City. Like any other city, there are parts of York City that I normally avoid.  However, on Sunday morning, most of it is fair game.  Coming into the city I turned onto Beaver Street and passed Central Market.   On the corner of Beaver Street and Market Street is the spot where the headquarters  of Revolutionary War general "Mad" Anthony Wayne once stood.  General Wayne made his headquarters here in the spring of 1781.  The old iron lamp post attached to the M & T Bank building on the site today is original and was attached to General Wayne's headquarters. 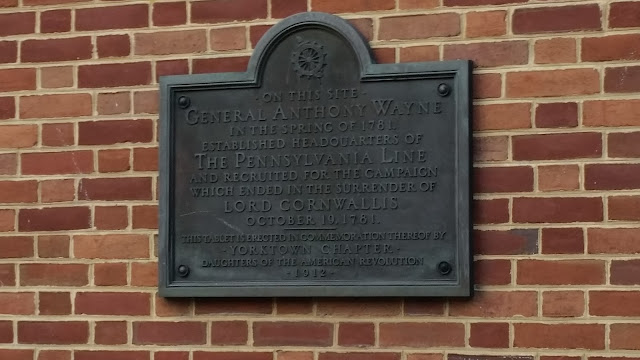 Straight down Beaver Street is Penn Common.  There is so much history hidden all around...if you just take the time to look.  Penn Common was deeded to the city of York in 1741 by the descendants of the founder of Pennsylvania, William Penn.  It was used as a hospital for wounded soldiers during the American Civil War.  The hospital was established in 1862 and some of the first patients brought here were the wounded from the Battle of Antietam (September 1862).  The park also served as a camp during the American Revolution.  While in York the previously mentioned General Anthony Wayne oversaw the execution of soldiers in the Continental Army who were found guilty of mutiny.  General Wayne was controversial in both life and death.  Thirteen years after his death near Erie, PA in 1796, his son, Isaac, moved his remains from the northwestern part of  Pennsylvania, to the southeast corner of the state near Philadelphia, PA.  Many of his remains did not survive the journey across the state and were lost somewhere in the middle of the state.  It is said the General Wayne's ghost rides the roads between Philadelphia and Erie, PA looking for his lost bone.  Cool story...if you believe in ghosts!

The remainder of my ride today just included zipping in and out of the empty Sunday morning streets of York, PA.   The city is really becoming more and more bicycle friendly.  There are bike lanes running west to east in multiple parts of the city.  Just recently a new bike lane was created on Princess Street east of the city.

All in all...I got in twenty miles of fun, history, and peaceful exercise.  Not a bad way to start a day.