A couple of years ago, Mark and I were mountain biking near State College, Pennsylvania.  We began our ride from a parking area in Penn Roosevelt State Park.  I'm not sure if Mark's car was the only car there when we began our ride...but for some reason, as we wrapped up our day on the trails, I took notice that it was.

With the bikes on top of the car and with less sweaty clothes on, Mark and I walked down below the parking are to explore the near empty lake and the dam that contained it.  I remember Mark walking towards the lake and I headed out to the dam.  All around me I saw empty picnic tables and signs put up by the DCNR which were meant to educate the  public on the plant life and wildlife which is native to the area.  My mind raced back to my childhood and the amount of time my family spent at Shawnee State Park in Bedford County and Ohiopyle State Park in Fayette County.  Memories of picnics, charcoal grills, hiking, exploring, and family time.  Again...the realization that our car was the only one there came to the front of my head...and I asked, out loud, if people still made use of the state parks like we did 20-30-40 years ago.  Was this park always this empty now...or is it possible that we just happened to be there late in the afternoon on a Tuesday?


If you live in Pennsylvania then there's a pretty good chance that you are currently within 50 miles of one of the Commonwealth's 121 State Parks.  I'm not sure if that is most in the nation...but it's got to be near the top.  Combined, Pennsylvania's State Parks offer over 200,000 acres for hiking, camping, picnicking, fishing, hunting, wildlife watching, and yes....mountain biking!  From my house in Manchester, PA, I'm only 18 miles from Sam S. Lewis State Park, 22 miles from Gifford Pinchot State Park, 24 miles from Codorus State Park, 52 miles from Swatara State Park, and 57 miles from Pine Grove Furnace State Park.  That's pretty cool!

Valley Forge State Park (now Valley Forge National Historical Park) was the first state park in Pennsylvania.  In 1893, Pennsylvania's governor, Robert E. Pattison, signed Act 130 "for the acquisition of ground at Valley Forge for a public park."  This act also created a commission that would work to acquire more land for public use.  In the early 20th century, Joseph T. Rothrock headed the Commission of Forestry.  As a medical doctor and a forester, Rothrock set up camps in the parks for people suffering from respiratory illnesses.  Following the Great Depression, the Civilian Conservation Corps established 113 CCC camps in Pennsylvana (2nd only to California) and, along with helping to fight fires and build roads, helped to create many of Pennsylvania's State Parks.


So...back to the question I had while exploring Penn Roosevelt with Mark on that June day in 2014...do people still use the parks like they use to?  The answer, in my opinion, is a resounding YES...and here's the proof:
Over the past 40+ years I've been to a bunch of State Parks for a variety of reasons with a variety of people.  Here are (in no particular order) all the Pennsylvania State Parks I've been to (so far)*...with a few of my memories attached.  Hope you enjoy!

Pennsylvania's state parks have been such a big part of my life.  Ohiopyle has been, and continues to be, a family tradition.  Shawnee brings back so many childhood memories.  Pine Grove Furnace has become, for me, synonymous with mountain biking.  The parks are beautiful...they are convenient...and, best of all, they are free to the public (even for all of you out-of-staters)!  Today, they are run through the Department of Conservation and Natural Resources.  Improvements are constantly being made (yep...no more smelly green bathroom at Pine Grove Furnace).  So...whether your thing is camping, or hunting, or hiking, or mountain biking...whether it's with your family, with your friends, or on your own...check out a state park near you.  The only money you'll need is for the ice cream on the way home because, in Pennsylvania, the OUTSIDE IS FREE!

Life is a journey...not a destination!

David A. Raymond -- March 11, 2017
Be sure to check out HIGHPEAKSHIKING.COM and all my other posts at ALL TRAILS LEAD TO ICE CREAM!

*State Parks that I visit after I post this will be added at the bottom.  Be sure to come back and check out other parks that I know I will eventually get to!

Here's a list of GARMIN maps and stats from a few of the rides featured in this post:

The ride winds down...the bikes are loaded up...ice cream is on our minds...but the day's adventure isn't always over.  So many times we find ourselves mountain biking in locations that are full of history, beautiful scenery, and hidden surprises.  These post-ride field trips add to the mountain biking experience, form lasting memories, and strengthen bonds of friendship. They are proof that there is more to see beyond the trail and, just because the the ride has ended...the adventure doesn't have to.  Here are just a FEW of the excursions, sights, and "nerdiness" that have highlighted our mountain biking trips over the years.  Enjoy!

If you enjoyed reading this...by all mean, please  tweet it!

You can find all of our ride pics and trail maps on the ALL TRAILS LEAD TO ICE CREAM website and, as always,  here's a list of GARMIN maps and stats from a few of the rides featured in this post:

(October 14, 2013) Mountain biking the ALLEGRIPPIS TRAILS with Mark and Mikey

There's a small section of trail located at the base of trail #7 at Rocky Ridge County Park that I have NEVER successfully ridden.  As a matter of fact, the only person that I've ever seen pedal over that rock garden is Mikey Nardelli...and he made it look like child's play.  There are some trails and obstacles just aren't worth it.  I think the older I get the more I appreciate my health, my body, my family, and well...my life!  A good sense of fear can sometimes be a good thing and I find no shame in sometimes saying, "I'll hike this one."

Through the years, all of our skill levels have increased exponentially.  I can remember, years ago, watching Mark and Tim descend down hills that I never in my life would think were possible to ride. I've seen Kristian hop his mountain bike from obstacle to obstacle with incredible grace.  I've witnessed Mikey ride, as smooth as butter, some crazy cool rock gardens.  Me?  I tend, along with Mark, to lead the way...willing to let others in the group prove to me that something is rideable.  Logs.  Hills.  Rocks.  If you can think of it...it's a pretty good bet that we've tried to ride it. 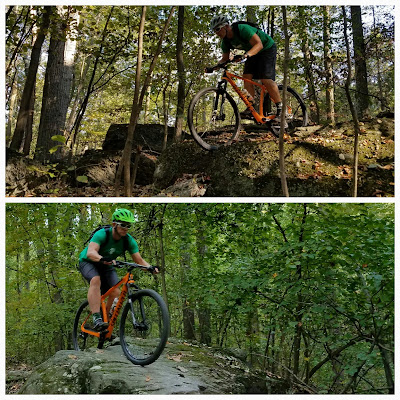 Common sense has long since replaced peer pressure.  It's an unwritten rule within the group that no one has to "drink the Pabst" and feel pressured ride what they aren't comfortable with.  We've all become pretty good at spotting "easy buttons" to get around the trickiest of trails.  Shortly after he began riding with us, Matt Linnane told Tim and I that he loved that our rides never turned into races or pissing contests.  It's one of my favorite things about the guys I ride with and it helps to make all of our rides rideable...for everyone involved.

If you enjoyed reading this...by all mean, please tweet it!  As always,  here's a list of GARMIN maps and stats from a few of the rides featured in this post: